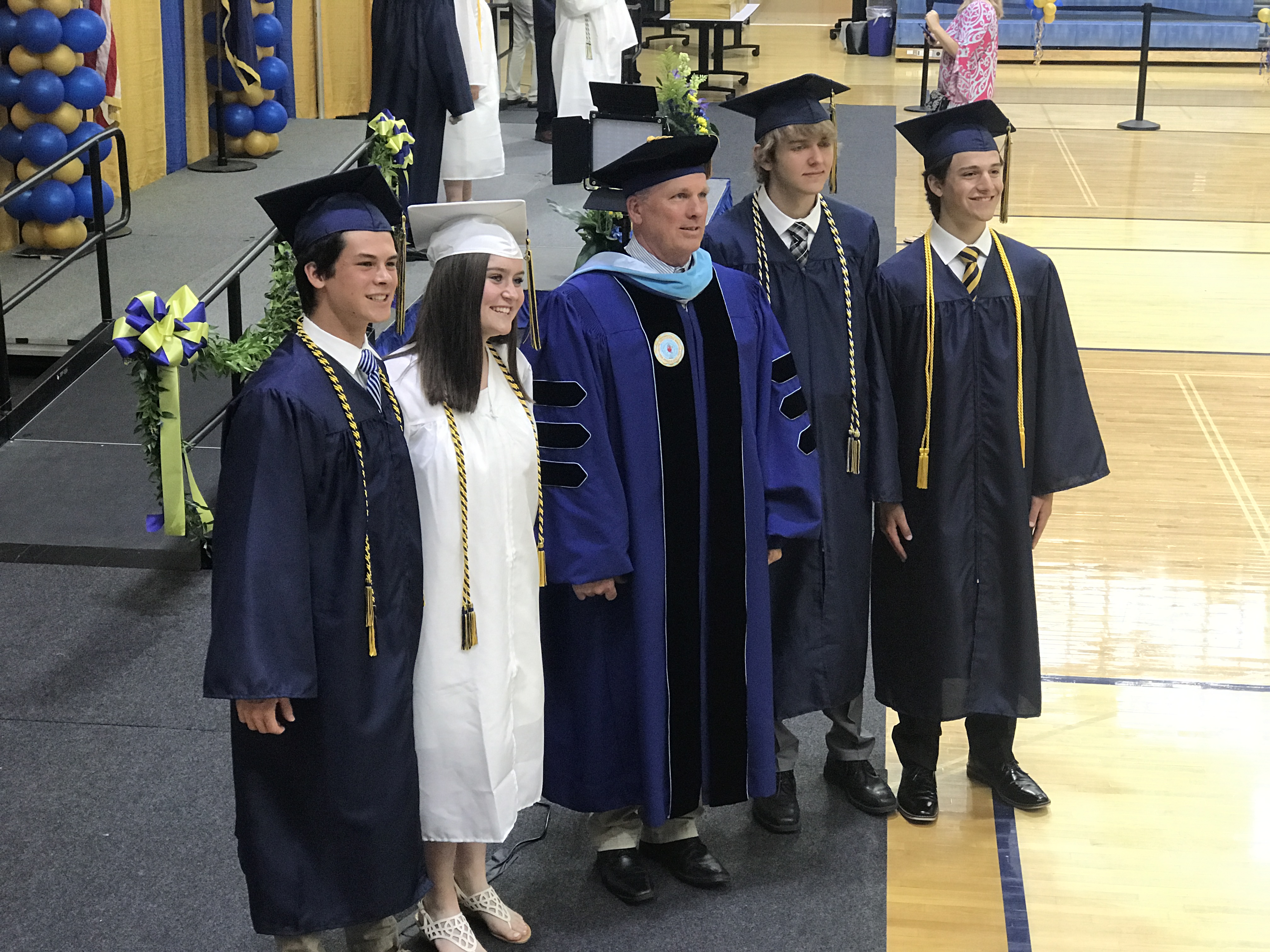 After 36 years as a Spring-Ford Ram, Dr. Patrick Nugent, Spring-Ford Area High School Principal, has announced that he will retire on August 7, 2020. In a video message to his staff, Dr. Nugent said, “Spring-Ford is a great school district because of you all, our loyal faculty and staff.”

For the last 36 years, Dr. Patrick Nugent has dedicated himself to the Spring-Ford Area School District and Spring-Ford community in a variety of ways.

A lifelong Ram himself, Dr. Nugent truly bleeds blue and gold. Dr. Nugent first became a Spring-Ford Ram as a kindergarten student in 1967. After graduating from Spring-Ford in 1980, he attended Slippery Rock University. In 1984 he returned to Spring-Ford to start his career as an educator in the Health and Physical Education Department. Early in his career, Dr. Nugent’s passion for coaching could be seen on the football field and wrestling mat where he was instrumental in the success of both programs. Most notably as the head wrestling coach, Dr. Nugent’s wrestling teams won nine league championships and he was recognized as Coach of the Year seven times. In recognition of a remarkable coaching career, Dr. Nugent was inducted into the Tri-County Chapter of the Pennsylvania Sports Hall of Fame and PIAA District I Wrestling Coaches Hall of Fame as well as being inducted into the Prestigious Montgomery County Coaches Hall of Fame.

Dr. Nugent transitioned from the classroom and athletic arena into administration and brought with him the same level of allegiance, passion and ambition. First, serving as an assistant principal and then taking on the leadership role of High School Principal for the last eighteen years.

Dr. Nugent’s vision, work ethic and drive contributed immensely to increased student opportunities in Advanced Placement Courses, dual enrollment at local colleges, athletics, fine arts, and the expansion of virtual courses offered at the High School. During his tenure in leadership positions, he pioneered many initiatives that improved student performance and through his visionary foresight and innovative ideas transformed Spring-Ford Area High School to be considered one of the leading public educational institutions in the surrounding area and earning national recognition multiple times over.

Outside of the office, Dr. Nugent serves as a liaison for the high school with the Spring-Ford Chamber of Commerce, the Spring-Ford Education Foundation, the Spring-Ford Rotary Club, president of the Pioneer Athletic Conference (PAC), and serves on the PIAA Board of Control for District One. While he holds many prestigious accolades and accomplishments as a principal and coach, his proudest accomplishments are his two children Lexie and Dirk, and his marriage to Dori. Following his retirement, he and Dori plan on moving south to enjoy warmer winters, more time outdoors, and long visits with friends and family.

Dr. Nugent has had a profound impact on the Spring-Ford community, the students, staff, teachers and colleagues who have been fortunate enough to work with him over the last 36 years. It is safe to say that Spring-Ford would not be what it is today without his heart, vision, loyalty and devotion to the school district and community he loves so much.

In a letter announcing his retirement to his peers, Dr. Nugent said, “You are a great group of talented, intelligent individuals. While I am sure I could share all kinds of advice I will leave you with this: treat people as you would like to be treated, never forget where you came from, and most importantly, always be loyal to yourself, spouse, family, colleagues, and friends.”

The Spring-Ford Area School District will honor Dr. Nugent with a video tribute from his current and former students, athletes, co-workers and friends. Click here to contribute to the video tribute!